One year ago, I allowed a blot on my record. The ugly consecutive letters of  D, N & F. I failed to complete the 505k Graperide Ultimate. This remains the only time that I have failed to complete an endurance event (although, in one instance I completed the course but narrowly missed the final time-cut). I had to avenge this terrible blot on my record and complete the Graperide Ultimate in 2013 by completing the 505km in under the 24 hour time-limit. I have ridden over 500km plenty of times, but never within, or close to 24 hours before.

Leading into the ride, I felt I had been riding stronger. Strava agreed, with (“post-Strava”) personal records being achieved almost everytime I sat on my Brooks saddle and pedalled for the month beforehand. I also reminded myself, that to improve on last year, I just had to get less than three punctures on the first lap! Thankfully, I was able to carry this form into the Ultimate, which I successfully completed in 22h40m. I was especially pleased to finish strongly, even after this distance rather than suffering, hurting and stubbornly pedalling to the finish. This finishing performance has left me pumped and motivated for larger challenges coming up later in the year.

Lap one began with most riders in a bunch, rotating out the work off the front until some of the faster guys decided to step on the gas as Blenheim approached, at which time I quickly found myself spat out in my usual place - off the back. I was resigned to not seeing any other riders for a few more laps, but was surprised to come across Eugene struggling a bit in the vicinity of Queen Charlotte Drive, and the Linkwater straights. I has passed him, but he came back riding fast and strong along the straights. I joked to myself at getting him on the approaching right-hand bend (Eugene had recently obtained the NZ Indoor 24 hour record on a velodrome, only turning left) and sure enough I did. Eugene was still overcooked from his record breaking feat and withdrew shortly after that.

Matt Oliver kindly helped me refill my bottles etc (thankyou!) and I was back underway after about 12 minutes replenishing my food and drinks, and putting my hi-viz gilet in my pocket for use later in the lap.

I rode the second lap in solitude, but recall Matt Oliver advising me that Tim was aiming to catchup to me on this lap. Surprisingly, even after a bit of faffing making sure I had the right spare clothing for the pending cold of night, I still hadn’t seen Tim anywhere.

Ugh! Punctured. Right outside the pub in Renwick to ensure that I got a running commentary as I changed the tube, and confirmed that bar patrons don’t know what Lance looks like (or that, he never had repair his own punctures). Following the repair in haste, I could feel a bump in the tyre as I rode off, and a short way down the road, I had to deflate and reseat the tyre into the rim wall correctly again. It was getting cooler, but the knee and merino arm warmer combo was working well.

Uwe passed early in this lap, on Queen Charlotte and I returned the favour between Havelock and Renwick. We must have been riding at a similar pace, with variance in speed depending on conditions, as this occurred a few times over the next couple of laps.

Definitely found maintaining speed in darkness an issue, especially without a high volume of cateyes and road-side post-mounted reflectors. Suicidal hedgehogs were all over the road to add some slalom action!

I completed the lap and arrived to Damian sleeping in the TPG shelter, and no sign of Matt Oliver (who I later learned had gone to fetch Tim whom had withdrawn due to achilles tightness late in his third lap). Pure self-service for refilling this time round. It was definitely getting cold. I placed a balaclava in my back pocket, for if it got any colder on my fourth lap.

Ahead of me, was fast approaching behind me. The head to head duel for line honours between Joshua Kench and Craig Harper was on. I understand that Josh punctured, when Craig passed him. Craig passed on Queen Charlotte while I fought hard not to be lapped with my light battery slowly fading away. I swapped my battery over on the Linkwater straight and heading over Mahakipawa Hill where Josh came through and lapped me, on his way to a narrow three minute victory.

I managed to depart for my fifth lap marginally ahead of the one-lap riders start and received some encouragement from Josh and others as I departed for my final lap. I hoped to make as much use of drafting as possible. This was good in theory, but the bunches that had just started had far too much enthusiasm for my 400km+ legs. I passed Uwe, for the final time on the way up Old Renwick Road to Blenheim. I received plenty of encouragement from other Onslow Tarbabies – Frank et al as they whizzed by. Gillian kindly offered some drafting assistance on the way into Picton until she was able to hold onto a bunch. In general, I was okay on the flats on this laps against those with fresh legs, providing they didn’t attack. I was grinding out the hills a bit more than usual on this lap. 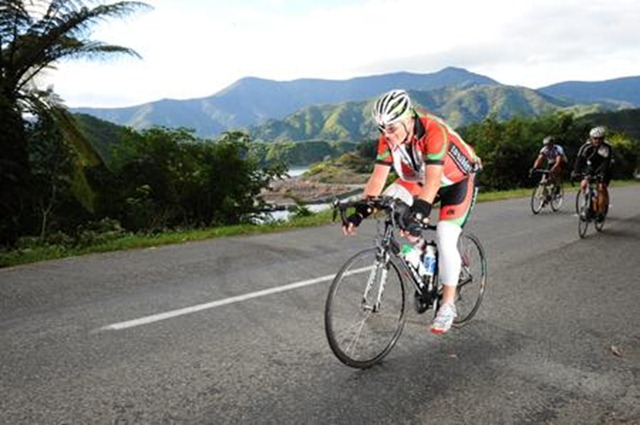 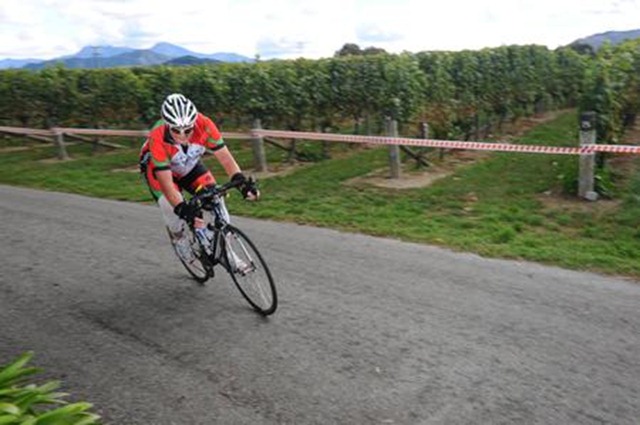 I briefly saw fellow Tarbaby Rachel at Linkwater on her way to winning the two-lap Magnum – congratulations on your victory. Once over Mahakipawa for the final time, I was amongst split bunches of riders riding one lap in about 3h30 and was able to hold their wheels, and even lead the bunches at times. With the final hill about 6km from the finish I gave it a nudge and went hard for the line from there. When I saw Rick & Jo from the Tarbabies in their car next to me over the Wairau River bridge I knew I couldn’t let up and remained in the big-ring and down in the drops riding hard the whole way to the line – after all, this is where the cameras are, and it is important to look good for the cameras!! 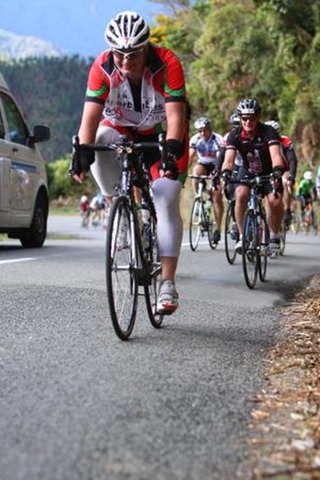 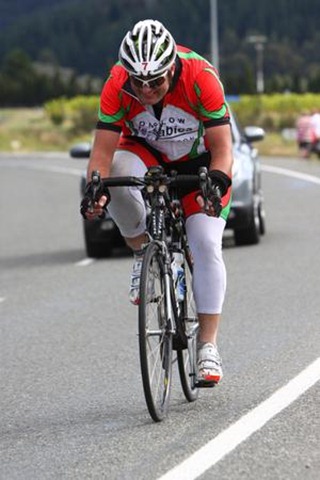 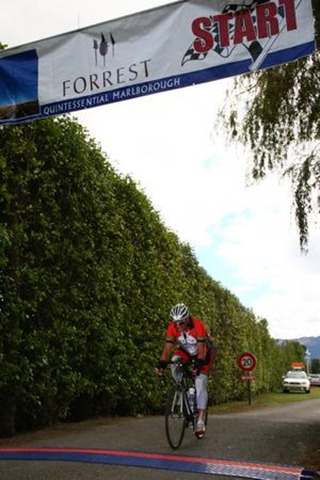 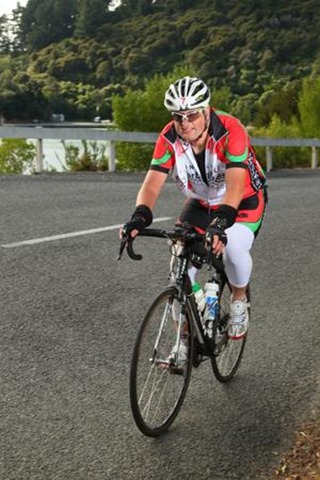 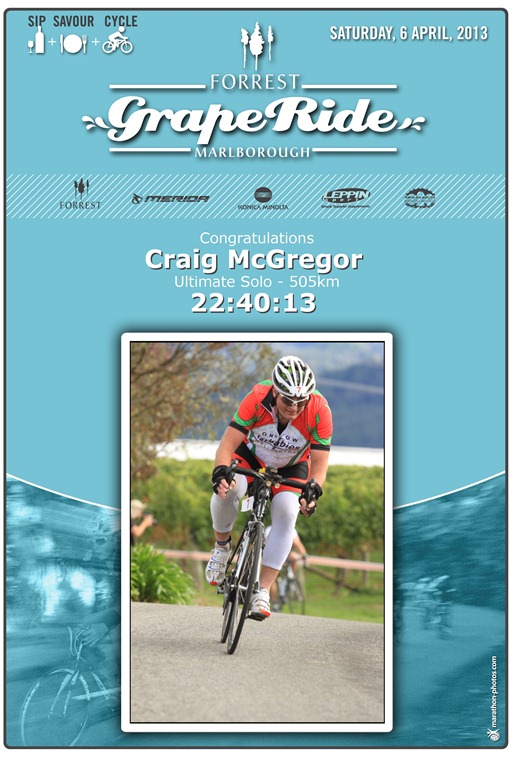 All done in 22h40m13s. This is by far my fastest 500km or thereabouts. My trip data is showing a little less distance than the claimed 505km. Most likely due to both GPX file straight-lining, and not coming in and our of the Forrest Estate Driveway on each lap.
Unknown at 1:40 pm
Share